Rhubarb means spring is on its way! It is one of the first crops to be harvested in Britain and remains in season from February to July.

The early harvest is often “forced” by being grown in the dark with heating to encourage growth. You can force rhubarb in your garden by covering the crown in winter with a lidded rhubarb forcer - or you can use a dustbin! It’s a real thrill to pull and twist (never cut) those pale pink stems. Do remember to only eat the stems as the leaves are poisonous. Uncover by April to allow the summer sunshine to feed the crowns for next year. 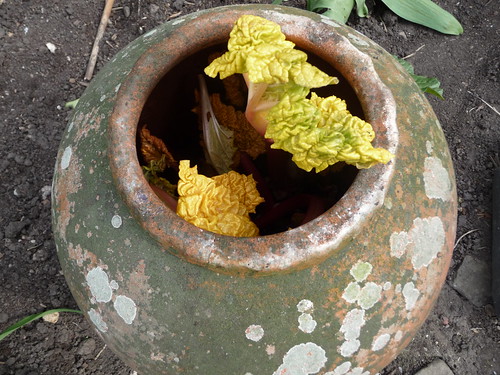 Rhubarb is one of the few vegetables that is traditionally cooked as a dessert, although it can be an unusual addition to savoury dishes and makes great ketchup or chutney.  Rhubarb is very sharp and requires sweetening. Try eating it raw, sliced finely and dipped in sugar. When it comes to cooking, roasting rhubarb keeps its shape rather than boiling to a mush. In puddings, try enhancing with ginger, agave, vanilla or cinnamon.

Here are some of our favourite rhubarb recipes ~

I’m definitely intrigued by the Rhubarb Chia Jam.  I did Rhubarb Ketchup last year, spiked with ancho chilli, based on one of Gloria Nicol’s recipes. It was pretty amazing! I definitely err on the savoury vs sweet side when it comes to rhubarb. Though a good old fashioned rhubarb pie always takes me back home (the plains of central Illinois!).